This half-day excursion from Athens gives you plenty of time to explore the many treasures around Corinth. Spend the morning uncovering the ruins of the classical city of Corinth and also enjoy short stops at the Corinth Canal and the ancient port town of Kechries.

You'll head southwest through pretty countryside to the steep-walled Corinth Canal, which connects the Aegean and Ionian seas. You'll be able to take some great pics from above. Next up is ancient Corinth. The former stomping ground of the mythical Jason of the Argonauts is one of the Peloponnese's most underrated classical archaeological sites. St Paul also lived and preached here. Let your guide bring the past to life as you discover the Agora, or market place, Pirene fountain and Doric Temple of Apollo, which dates from the fifth century BC.

Rounding off the morning is a stop at the seaside town of Kechries, where St Paul is said to have disembarked from his ship before making the overland journey to Corinth.

Read more
COVID-19 information
The following health and safety measures are in place, so you can relax and enjoy your experience.
What's included
What to remember

Not suitable for guests with reduced mobility

Read more
Provider
TUI HELLAS AE
Booking fee
Good news! No extra fees are applied to this booking.
Cancellation policy
Receive a 100% refund if you cancel up to 1 day before the activity begins.

Athens's fascinating mix of antiquity and contemporary vibrancy is especially evident when the sun goes down. You'll be whisked off in the evening through central Athens on a short scenic tour, soaking up the nocturnal sights and sounds of this dynamic city. Arrive at the Sacred Hill of the Acropolis and marvel at the illuminated structure towering over the city. Then it's on to Plaka. Wander through its narrow, cobbled streets, packed with bars and cafés, as you're taken to a typical taverna. Here you'll enjoy a delicious local dinner and a rousing floor show of Greek folk dance and music.

Athens is peppered with important landmarks and archaeological sites. Take the Acropolis line to see landmarks such as the Panathenaic Stadium – site of the first modern Olympics in 1896 – the National Library and Parliament, the Temple of Olympian Zeus and the Acropolis with its epic Parthenon. The Piraeus line lets you see attractions such as Lion's Gate, the Planetarium, Mikrolimano Harbour and the Municipal Theatre. This hop on-hop off sightseeing bus tour is the ideal way to explore the multiple attractions of Athens at your own pace.

The beautiful islands of the Saronic Gulf are just a short journey away from Athens. Board your vessel at Piraeus port, heading across the Aegean to Hydra. Here, you have free time to explore the island's unspoilt beauty before jumping aboard again. Enjoy lunch on board as you cruise towards Poros, with its charming portside town. The last port of call is the small island of Aegina – the most remote of the three you'll visit. You are free to roam the backstreets of the port – check out the Venetian Markellos Tower – or take an optional tour of the ancient site of the Temple of Aphaia.

This trip takes you out of Athens and into the open countryside to explore. Take the wonderfully scenic coast road along the Saronic Gulf to the Corinth Canal, which connects the Aegean and Ionian seas. Then it's on to Mycenae. Here you'll be guided around its treasures, such as the Lion's Gate and the Royal Tombs. After lunch, we'll journey through the fertile plain of Argolis, headed for Nauplion, nestled at the foot of a cliff and crowned by the ramparts of the Palamidi Fortress. Last stop is a trip to Epidauros, to visit the fourth-century BC theatre, famous for its astonishing acoustics.

Delve into the ancient treasures of Delphi and Thebes on this full-day tour. First, we'll journey through the fertile plain of Beotia, crossing the town of Thebes, home of the mythical King Oedipus. Then it's on to Delphi, considered the centre of ancient world. Tour the ruins of the Sanctuary of Apollo Pythios, set beautifully on the slopes of towering Mt Parnassus. You'll also visit the museum. Here, you'll get to see s sculptures such as the bronze Charioteer and the athlete Aghias. After lunch in the modern village of Delphi, we'll stop off at the quaint villages of Levadia and Arachova. 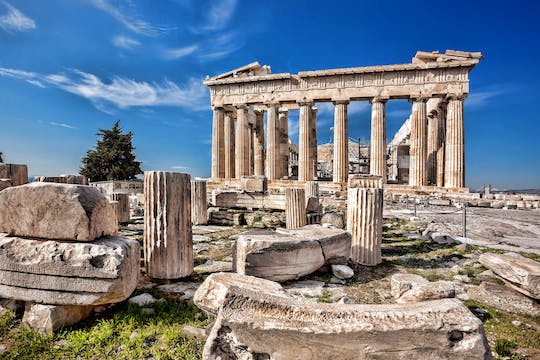 A tour that combines culture with nature. Your journey through time kicks off with a guided tour through central Athens. You'll see the Tomb of the Unknown Soldier on Syntagma Square, the Temple of Olympian Zeus, Hadrian's Arch and the Academy. Complete your morning with a tour of the Acropolis and the Parthenon – topped off with a guided visit to the Acropolis Museum. After lunch, there's a scenic drive to Cape Sounion – the southernmost point on the Attica peninsula. Here you'll be treated to great panoramic views across the Aegean Sea – under the watchful eye of the Temple of Poseidon.