Your guide will begin by talking about the Museo dell'Opera del Duomo, which commits to the conservation of the Dome and other artworks from the genius of Michelangelo, Donatello, Lorenzo Ghiberti, Luca Della Robbia, Arnolfo di Cambio and many others.

Afterward, as you walk through the piazza you'll catch glimpses of the red dome that was completed in 1436 by Filippo Brunelleschi and is known as the largest building in Medieval Europe. After an interesting explanation of this showstopper, your next stop will be the showpieces of Florentine Gothic architecture: Giotto's Bell Tower and the Basilica of Santa Maria del Fiore.

The guide will also take you around the exterior of the Loggia del Bigallo, a late Gothic building in Florence with an interesting historical façade. Finally, you’ll enter through the “Gates of Paradise” to the Baptistery of St. John
which stands across from the Duomo Cathedral. You will also be guided on the technical and artistic aspects of the architecture.

Your guide will talk about how the Cupola was designed and built by Filippo Brunelleschi, who won the competition for its commission in 1418. The way up (and down) are basically tight corridors for the workmen who built the cathedral and for maintenance, they were never thought of as being open to the public. On the interior of the dome, you can admire the Giorgio Vasari's frescoes of the Last Judgment (1572-9) up close with an interesting explanation of the frescoes from your guide along the way up to the top.

Look down and on the base, just above the drum, you'll see that Baccio d'Agnolo began adding a balcony in 1507 and that one of the eight sides remained unfinished. There's a story behind this balcony, your guide will reveal it along the way: why the work was immediately halted, and why the other seven sides remain rough brick still today.

Once you climb to the top of the Cupola, you will be enchanted by the panoramic view of Florence in front of your eyes. The guide will talk about the history and art of the Duomo Square and answer any of your questions about it.

Meeting point:
Porta della Mandorla in front of Arnold Coffee.
What to remember
Read more
When
Read more
Provider
StarFlorence
Booking fee
Good news! No extra fees are applied to this booking.
Cancellation policy
Receive a 100% refund if you cancel up to 1 day before the experience begins. 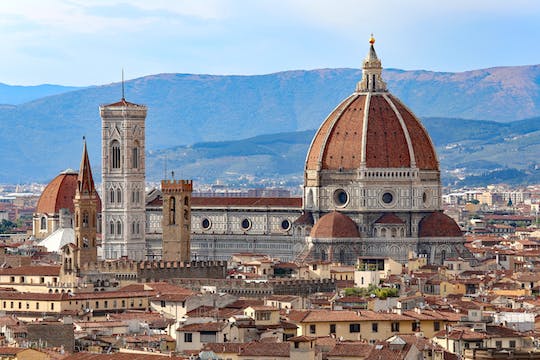 Mobile voucher accepted
from:
$187.00
Sorry, it's sold out
Unfortunately all tickets have been sold out for this event

Buy your Chianti wine tour from Florence with a sampling of wines, oil and balsamic vinegar. Visit a historic winery and taste excellent Chianti wines.

Explore the Accademia Gallery in Florence with a dedicated, private guide. Discover Michelangelo's greatest masterpieces such as the iconic David!

Afternoon or evening pizza and gelato making in Florence

Learn to make pizza and gelato just like Italians do! Join this late afternoon or evening cooking class in Florence.