El Escorial, the Valley of the Fallen and Segovia guided tour from Madrid

The Monastery of El Escorial was built under the reign of the powerful King Philip II to be a residence for the Spanish kings. Used as a monastery and Pantheon for the royal family, it became the symbol of the great power of the Spanish Empire at the time. The monument was inscribed in the UNESCO World Heritage Site list, having artistic and historic interest. The visit includes the monastery, the Cloister of the Four Evangelists, the Palace of Philip II, the Pantheons of the Royal Family, the Chapter houses, as well as the basilica.

The Valley of the Fallen is a monument built as a memorial for those who died during the Spanish Civil War in 1936. Located in a beautiful valley in the mountains of Guadarrama, this impressive work has a colossal cross (over 150 meters high). Here you will also see the basilica and the crypt carved into the hard rock under the mountain. This tour includes the entrance to the Valley and the visit inside the basilica.

In the afternoon, you will visit Segovia (via Madrid). This old Roman city is rich in historical monuments and still preserves the magnificent roman aqueduct from the time of emperor Augustus. Here, we will visit the Alcázar fortress; the most spectacular castle and medieval construction known in Spain.

Read more
COVID-19 information
The following health and safety measures are in place, so you can relax and enjoy your experience.
What's included
What's not included
Where
Calle de Ferraz, 3, Madrid, Spain

What to remember
Read more
When
Read more
Provider
VPT Tours (Viajes Para Todos)
Booking fee
Good news! No extra fees are applied to this booking.
Cancellation policy
Receive a 100% refund if you cancel up to 24 hours before the experience begins. 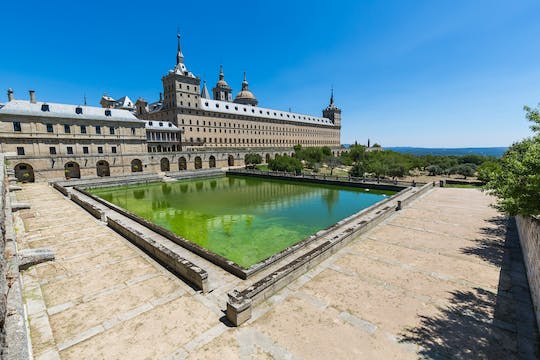 El Escorial, the Valley of the Fallen and Segovia guided tour from Madrid

Mobile voucher accepted
from:
$94.00
Sorry, it's sold out
Unfortunately all tickets have been sold out for this event