Straddling the main Mediterranean trade routes, Mahon has enjoyed great strategic importance throughout history. The Romans, Byzantines, Arabs, Catalans, Spanish, French and British all coveted its deep-water harbour as their own. This one-hour Don Joan catamaran trip takes you on a voyage of exploration all of your own.

On this catamaran trip, you'll sail out into one of the world's largest natural harbours while learning all about the legends and landmarks dotted around Menorca's capital. With the help of on-board commentary, you'll spot all the main sights as you cruise out of the harbour.

And with the lower deck containing four large viewing galleries with 24 windows, you won't miss out on any of the views both on land and under the sea. Keep an eye open for marine life, too, and enjoy the picturesque coastline of Menorca at the same time.

Read more
COVID-19 information
The following health and safety measures are in place, so you can relax and enjoy your experience.
What's included
What to remember

Read more
Provider
TUI ESPAÑA TURISMO S.L.U.
Booking fee
Good news! No extra fees are applied to this booking.
Cancellation policy
Receive a 100% refund if you cancel up to 1 day before the activity begins. Printed ticket only
from:
$14.00
Sorry, it's sold out
Unfortunately all tickets have been sold out for this event Discover Alaior from top to bottom with this combined package. Visit the beautiful baroque Santa Eulàlia Church. Admire its elaborate carved portal, frescoes and statues before heading to the rooftop for panoramic views over the town. There's also a visit to the underground air raid shelters built during the Spanish Civil War. This evening cycling tour from Es Mercadal to Cavallería beach is one of the most pleasant activities in Menorca. It's a gentle-on-the-legs 12km cycle through Tramuntana country roads, criss-crossing farmland. At Cavallería, you'll be able to go for a dip in the sea or just sit back and watch the sun go down at the lighthouse – the views are worth it. If jaw-dropping scenery and hiking are your thing, then this walking tour is for you. This is Menorca at its rugged best. Trek through the stunning Algendar Ravine, where exuberant vegetation climbs all over steep cliffs, to the Pas d'en Revull Gorge. This narrow trail leads us to the Camí Reial, which we'll take to the return to the start point at Ferreries. 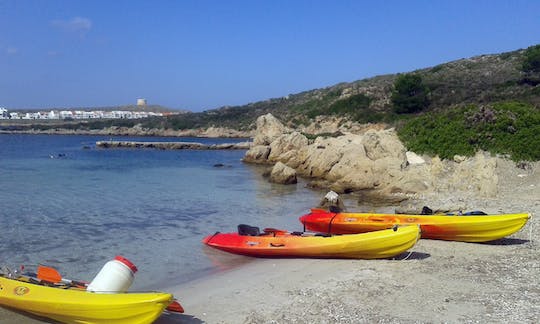 Menorca's rocky northern coastline is ideal for kayaking. Whether you're a beginner or an old hand, you'll love paddling your way along the shoreline of the secluded Fornells Bay, with its hidden coves and pine-clad islets. There'll also be swimming and snorkelling stops along the way. This activity is available either in the morning or afternoon. With calm and clear coastal waters, Menorca makes an ideal place to start scuba diving. This beginner scuba diving course sees you start in the pool, getting to grips with the basics, before taking your newfound skills out to sea. You'll sail to one of the island's top dive spots and join an expert guide on an underwater adventure. 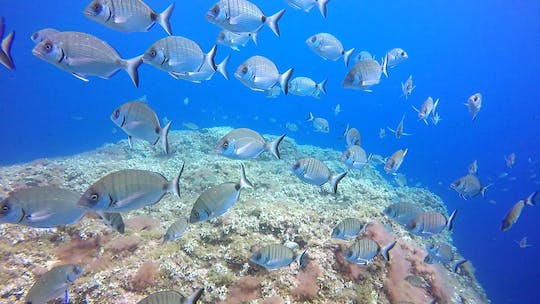 Ever wanted to explore the world below the waves? There are few better places to try a first-time scuba dive than Menorca. Let the experts from Blue Water Scuba school show you the basics before taking your newfound skills out to sea. Choose between a single or double dive, and you could see barracudas, octopus, groupers, moray eels and more.