Explore one of the biggest cities in Romania on a 2-hour guided walking tour. Built on the site of an ancient Roman fortress from the 13th-century, Timisoara is situated on the northern bank of the Bega River. Discover the first European city that used the horse-drawn trams and electrical street lighting and the first Romanian city that reacted at the Revolution in 1989 against the Communist regime.

Begin your walking tour in the downtown quarter and admire its many old buildings in Art Nouveau or Baroque styles, stroll through the large pedestrianized squares and feel the multicultural atmosphere of the city.

In Victory Square visit the impressive Orthodox Cathedral, the Opera and Theatre House. Next, explore the Old City Hall situated in Liberty Square. Then travel to Union Square which is dominated by the Catholic dome-church, Serbian-orthodox Cathedral and Arts Museum next to the President's Palace.

Meet your guide outside the Romanian National Opera in Victory Square.

What to remember
Read more
When
Read more
Provider
Carpathian Travel Center
Booking fee
Good news! No extra fees are applied to this booking.
Cancellation policy
Receive a 100% refund if you cancel up to 24 hours before the activity begins. 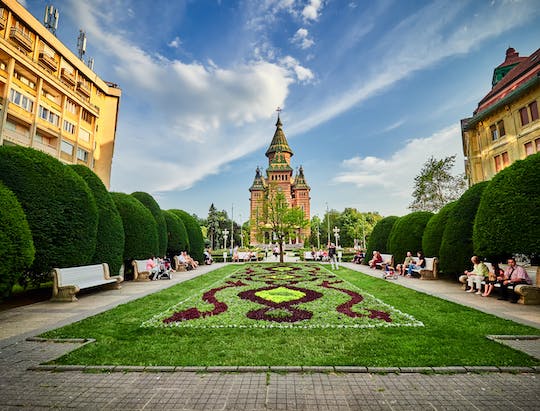 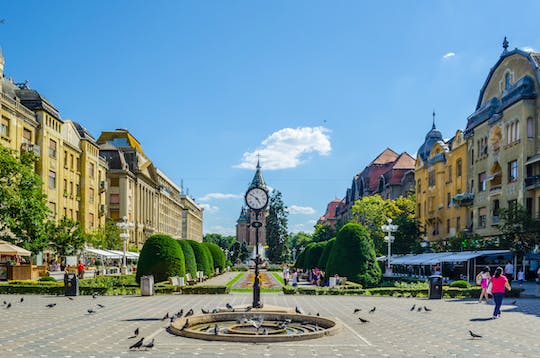 Go on a fun Timisoara walking tour where you will follow clues to discover amazing places and local stories using your smartphone.

free cancellation
Duration up to 1 hour 15 minutes
Available in: Hiking in the Banat Mountains

Book this hinking trip to Caras River's Gorge from Timisoara! Hike in the Banat Mountains and visit the city of Resita. Discover Romanian gastronomy and local history during this food tour in Timisoara. Try ciorba, mici and papanasi, all typical dishes. Book the walking tour of the communist Timisoara! Visit the SCARTZ Place, the Communist Museum and learn about the Romanian Revolution of 1989. Day trip to Corvin castle and Sibiu from Timisoara

Book the private tour to Corvin Castle and Sibiu from Timisoara! Visit the medieval castle and stroll around the European Capital of culture 2017. Day tour to Belgrad from Timisoara

Visit Belgrad, the capital of Serbia during this day tour from Timisoara! See the fortress and Kalemegdan Park.